BURNING FOR YOU - VERSIONS 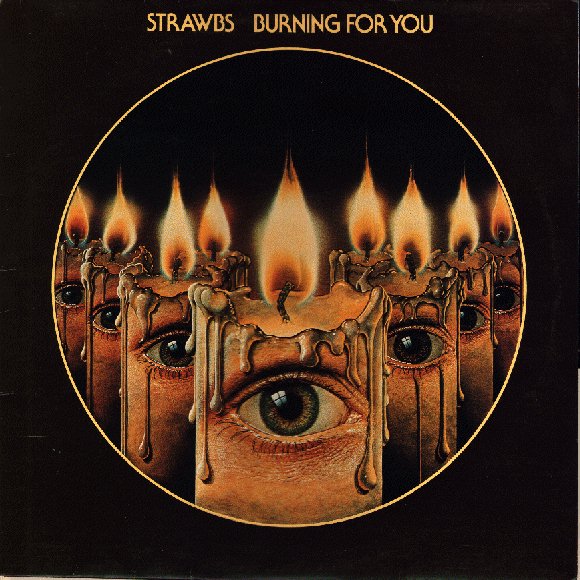 For large scans of the images, click on the images: you may need to use the zoom feature to see the full image

Back to main Burning For You page

Super 2391 287 (Oyster, 1977). Single sleeve with Patrick Woodroffe painting of melting candles and eyes (also used for a Brian Aldiss novel, "The Billion Year Spree"). No logos on front cover. There's a "Widescreen" logo (Lesser's prodution outfit) and Oyster and Polydor logos on the back at the bottom. Very dark brown, almost black, inner bag with lyrics on one side and montage of band members in circular design. Back cover features live concert photo.

Vinyl album (US): OY-1-1604 (Oyster, 1977). Packaging very similar to UK album. Like the American release of Deep Cuts there are several known variants.


Variant 0 Labels (credited by Discogs as Pitman pressing, but identical to Santa Maria pressing above)

Vinyl album (US): OY-1-1604 (Oyster, 1977). Plain sleeve with catalogue number written on. Plain pre-printed blue label - side 1 has A written on, nothing on side 2. Insert with track details.

Vinyl album (US): OY-1-1604 (Oyster, 1977). Packaging very similar to UK album, but with Oyster logo and cat number bottom left and Poldor logo bottom right of front cover. At the bottom of the back cover, US addresses and reference to US 8-track and cassette releases. Back cover top left is gilt-stamped "Demonstration, Not For Sale", and the US cat number is top right. The inner sleeve also has the US cat number and "Printed in USA" on the lyrics side. Typography on label matches Variant 1 below.

Vinyl album (Canada): OY-1-1604 (Oyster, 1977). Packaging very similar to UK album with different addresses at foot of back page, and a Polydor Canada logo. There's reference to Canadian 8-track and cassette releases, bottom right. (The inner LP bag with my copy has the UK catalogue number - not certain whether that's been switched somewhere or whether Canada was too lazy to change it!)

Vinyl album (Italy): 2391 287 A (Oyster, 1977). Front cover same as UK, but with Oyster and Polydor logos at bottom front left and right respectively. Back cover has Italian info and circular 1877/1977 logo "100 Anni Di Registrazione Sonore" at bottom right. The inner sleeve is black and white, slightly coarser paper than other inners I've seen. The labels include SIAE in a box, "D.R" and Made In Italy; side 1 has an actual SIAE ink stamp.

Vinyl album (Spanish): 23 91 287 (Oyster, 1977). Fairly similar packaging to the UK release except that the inner sleeve is 1 colour black and white rather than full colour. The back cover has details of the Spanish company releasing it.

Vinyl album (Norway?) 2391 287 (Oyster, 1977). Difficult to be certain about this. The cover seems identical to the UK release, including being manufactured in England. The album has writing round the rim referring to the Polydor trade mark being held by Deutsche Grammofon in Hamburg, but no other information. The seller listed this as a Norwegian pressing. The label has a "n&copyb" logo, which is the logo of Nordisk Copyright Bureau, a rights organisation based in Copenhagen. NCB is owned by the Nordic performing rights societies – KODA in Denmark, STEF in Iceland, STIM in Sweden, TEOSTO in Finland and TONO in Norway. It is a non-profit society, owned which administers copyrights for the Nordic and Baltic countries. All products manufactured under an NCB licence must carry its logo. However it is not 100% clear that having that logo means it is a release from one of those territories.

Vinyl album (Japan): MWF 1034 (Oyster, 1977). Japanese full release. As expected, the same in allo respects as the promo except for release labels (though my copy has lost its Obi.

There is a 4 page LP-sized insert - the outer pages replicate the UK inner sleeve, with the band photos and lyrics. On the inner pages there are track details in English and Japanese, and Japanese sleeve notes by Yoshi Hoshina, dated 13 Jun 1977.

Front and back cover with Obi

US Cassette: CT-1-1604. Printed white paper labels on cassette. Back of cassette outer is blank.

US Cassette: CT-1-1604. Very minimalist packaging, the inner card is blank, and the tracks are printed onto the cassette case. The cassette case bears the letters "CRC" which stand either for Columbia Record Club or Columbia House (Record Club) - see Discogs for more info.

8-track US: 8T-1-1604. The 8 track comes with a Polydor standard red card "foldover" to protect the exposed recording tape, which folds over the front back and all the way down each side.


Front and back with Polydor foldover

Programme 1
Burning For Me
Carry Me Home
Barcarole part 1

(*) Canada 8-track: OY8-1-1604. Listed on rear of Canadian vinyl release. Running order is the same as the UK album, but "I Feel Your Loving Coming On" is split over Programes 1 and 2, and "Heartbreaker" over Programmes 3 and 4.

South African cassette: 3177 287. Pretty minimalist packaging - cassette out which lists tracks on inner flap. Nothing on the reverse. No country of origin anywhere, but the clue is the Interpak logo (Interpak was a South African priting firm and appears on many SA release sleeves.)

Unusually for the late 70s, the cassette running order has been changed to equalise the two sides and save a minuscule amount of tape:

CD: RGF/WCDCD 027 (Road Goes On Forever UK, 1996, 2CD with Deep Cuts). The cover has been redone to combine graphic elements of both albums. Tray inner (i.e. under the lift-up tray) has portrait shot of 4-piece band (Cousins, Lambert, Cronk, Coombes). 12pp booklet contains lyrics (pp2-10) and track details (p11) for both albums - front and back of booklet (p1 and p12).

Pages 2 and 3 of booklet

Pages 4 and 5 of booklet

Pages 6 and 7 of booklet

Pages 8 and 9 of booklet

Tray inner and back

CD: RATCD 4220 (Muskrat, 2003, Japanese facsimile re-issue). Beautiful limited edition facsimile re-issue in card sleeve, with obi. The package even has a miniaturised lyric sleeve to match the original vinyl release, as well as a Japanese language one-sided black and white insert with sleeveg notes dated Oct 2003. Both the back cover and lyric inner have the Muskrat catalogue number, not the UK number. Though the original packaging doesn't refer to it, there's a bonus track - an acoustic version of "Joey And Me", which sounds as though it's really a Cousins/Willoughby track from slightly later on.

Witchwood Media CD release (with bonus track "Joey And Me")

CD: WMCD 035 (Witchwood Media, 2007). 4pp booklet - the front page reproduces the LP front cover, the back page an adjusted version of the circular montage that came on the LP inner bag. The centre spread of the booklet contains the lyrics in black & white. Outer side of the CD tray has an adjusted version of the LP back cover, and the CD reproduces the Patrick Woodroffe "candles with eyes" illustration - nice touch. Brian Willoughby is credited on the bonus track "Joey And Me".

CD: AIRAC 1705 (Airmail Recordings, 2013, Japanese facsimile re-issue). Outer cover is replica of original album. Obi includes ads for Sandy & The Strawbs, Two Weeks Last Summer and Deadlines. There is a CD bag which exactly replicates the inner LP bag which came with the UK album - a circular design with photos of the band in concert and lyrics on the other side (see above). Both back cover and lyric inner still have the UK catalogue number.

Also included is a 2x2 CD sized b/w insert with Japanese sleeve notes (by Masayoshi Funabiki, dated 7 Jul 2013) and track listing on one side and the lyrics (and who played what) reproduced on the other. Also noted that this is a 24-bit remaster. The CD comes in a fabric bag, the disc itself got up to represent the original Oyster label album.

ECLEC 2701 (Esoteric, Nov 2019). Booklet style outer cover with CD tray glued to inner back flap. 16pp booklet, with new essay by Dave Cousins. Pre-orders from Cherry Red came with a postcard - Heartbreak Hill on one side, Burning For You on the other.

Postcard - Burning For You side

For the other side see Heartbreak Hill Extended Edition page.

Back to main Burning For You page