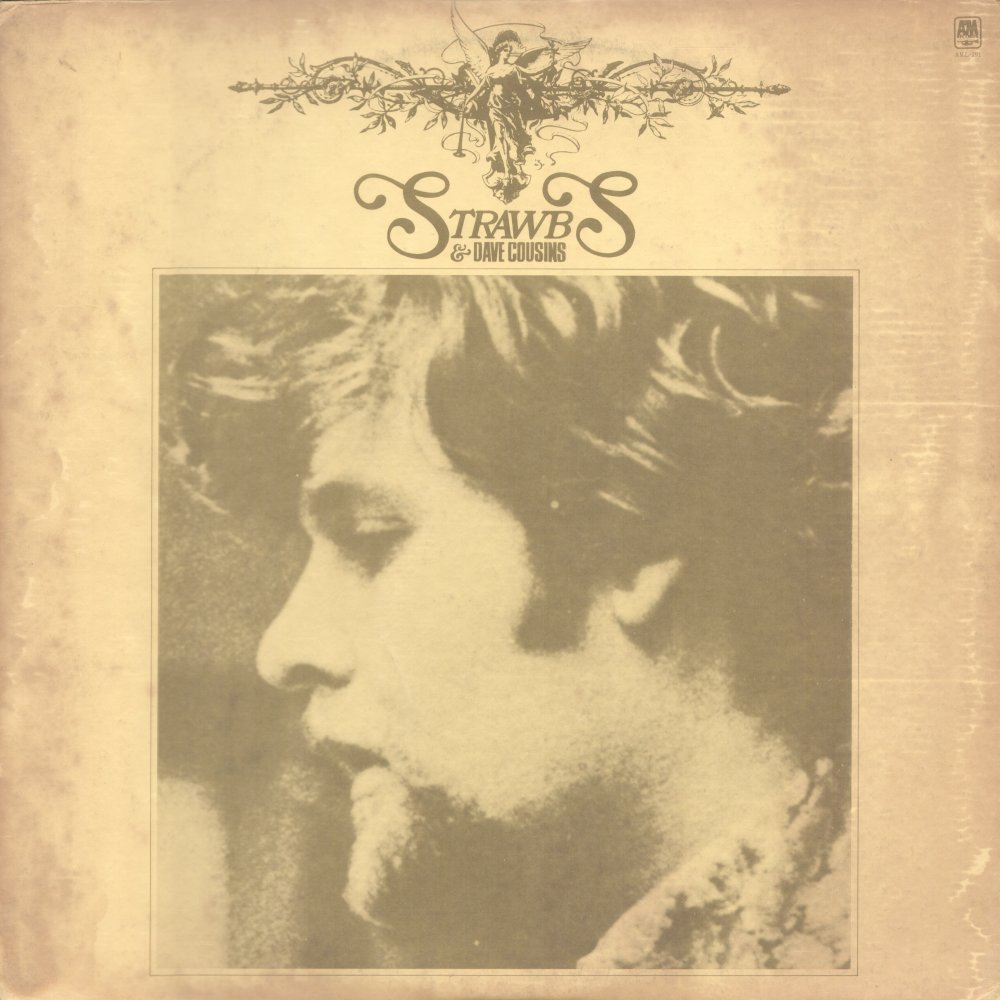 There are two versions of this Japanese-only release; the first one came out very much featuring Strawbs and Dave Cousins, possibly on the back of Strawbs' success with "Lay Down" and "Part Of The Union", but was quickly superseded by a lavish presentation, which although the title remained the same, was clearly intended to capitalise on Rick Wakeman's growing popularity in Japan rather than that of the Strawbs. The earlier version is very rare indeed, only ever seen one copy.

Not released on cassette, 8-track or CD

Back to main Strawbs and Dave Cousins page

AML 191 (A&M Japan, 1973 re-issue) White embossed outer sleeve, grey printing on rear , none on the front. Enclosed however is a lavish 16 page colour booklet. Some copies also include an album sized wraparound for the white cover, repeating the front and back of the booklet. Labels are exactly the same as the earlier release (in fact copies of the earlier release may well have been resleeved for the later one).

As you'll appreciate, white embossing on a plain white cover is impossible to scan: so here's a sort of "brass rubbing" to give you an idea of the design. The title lettering is the same as the back, above a pair of decorated columns/hourglass design. The A&M logo at the bottom has the catalog number. The back cover tells us that art direction was by G Kunisada, and album design by Oshi Pin Studios. The Obi is the same on both sides, except that on mine there is a Y2000 price sticker on the front.

Both covers, though they retain the "Strawbs and Dave Cousins" logo, nicely coloured in, make it clear that Rick is the focus of their attention.

Page 2 has credits - whilst the Witchwood tracks have individual credits for each track, those that come from Antiques & Curios all have full band credits for all instruments - a bit inaccurate for Rick's piano solo "Tenperament Of Mind", you might think {grin}.

Pages 3-7 appear to be some sort of interview, with participants K, M and I. Not aclue what it's about or who is beeing interviewed.

Page 8 has a nice pic of Rick and a 1 page article. Page 9 features pictures of keyboard instruments: Mellotron 400D, the Hammond B3 organ, the Mini-Moog and the Synthesiser IIC.

Page 10 has the lyrics for the songs, copied from Antiques and Witchwood, transcribed for "Blue Angel". (The latter has a few errors and mis-hearings - as I know myself, Two Weeks is not an easy album to transcribe accurately, but I particularly enjoy "Love is vow the Police search, that he alone is safe" instead of "The wisdom of the fool is such, that he alone is sane").

Pages 11-13 seem to be a timeline article, focused on Rick.

The right hand side of page 13 is a hand drawn family tree showing Rick's activities.

The promo copy I have is of the second release with Wakeman-heavy booklet and white card cover. Uncertain whether there was a promo of the original Dave Cousins version. If there was likely that the labels would be identical.

Back to main Strawbs and Dave Cousins page