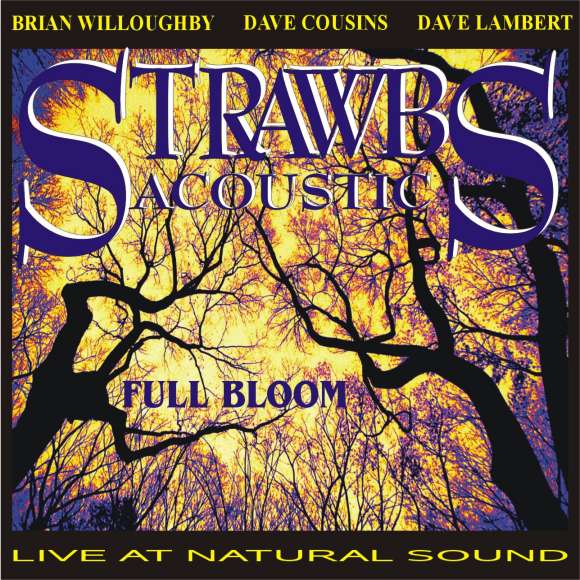 Back to main Full Bloom page

There has been some criticism lately about Strawbs production quality. Well, harken ye to this Lords and Ladies, Full Bloom is an audio masterpiece. It is live and done in one take, yet it could be a studio recording (I'll leave it to the liner notes to explain why) Jon Connolly and the gang at Natural Sound in Kitchener produced a great show. With the help of an excellent performance from the band have made an excellent CD. It's not like you are there, rather, the way you always want to hear the Acoustic Strawbs. Lambert aces "The Winter and the Summer, "Hero And Heroine" just rocks, just like "A Glimpse Of Heaven". You also get the"kids are in the room" version of "Round And Round". What ever you do, don't panic. Jon mentioned to me that "next time" he may change the order of some of the songs. This isn't over yet. The mistakes in the set list on the back cover make this version slightly collectable. Here it is for real:

Like the DVD, no "Benedictus", what's up with that? Again the quality is excellent. The sound board they had there could probably change the oil in your car too. Also great, readable liner notes.

Run, don't walk. Sell your mother, but get this CD.

The holidays are here, and since we've all been (ahem) good little boys and girls we have releases of not one, but two live concerts from Acoustic Strawbs (with Brian). In November, the DVD of the Hugh's Room Gig in Toronto was released, and just a week or so later, the release of Full Bloom, recorded last summer in Kitchener Ontario.

So, what's a fan to do? Well, the obvious answer – buy both!!! However if you have a limited budget and have to choose, in my opinion, Full Bloom is the way to go.

First of all, though Full Bloom is a live album, recorded in one take from a concert, it's almost a misnomer to call this a concert album. In order to pack as many songs as possible onto a single CD (and more songs is ALWAYS a noble pursuit), the good people at Natural Sound eliminated almost all of the applause, and all of Dave C's wonderful introductions to the songs. Due to the high quality of the band's performances, it makes this album sound almost as if it were recorded in the studio. It certainly has the feel of a studio album rather than a live album.

Production quality is good, especially since we know that it wasn't done in a studio. However, there is less of a stereo effect than on other albums. On Baroque And Roll, for example, you can hear Dave L's guitar in the right speaker and Brian's work in the left speaker. Here, you receive a more blended sound. Other blemishes are minor. For example, in mixing, there is an occasional "echo" in the vocals. I'm sure this was intentional, since the instrumental tracks are not echoed. However, on occasion, I though the effect detracted from the album. Also, there are the occasional missed note (either vocally or from the guitars), as one expects from any live album.

All of these flaws, however, are minor. Overall, the album is fantastic. Dave C's voice was as good or better than I've heard him recently in concert. In some of my concert reviews, I've noted that there were nights when Dave L's guitar playing stood out, or where the interplay between Dave L and Chas (or Brian) was especially good. On Full Bloom, while we have the same high instrumental quality we've come to expect, I felt it was a stand-out night for Dave C.

About half of the tracks on this album also appear on Baroque And Roll. The other half haven't been released on a CD before. I think the mix of songs itself may overall be better than that on Baroque And Roll, and to be honest, I would be hard-pressed to say which of these albums I prefer (since I thought Baroque And Rollwas the best album from the band since Hero And Heroine , I mean this as a high complement to both works). It improves with each successive listening.

Now, as to why I would choose this over the Hugh's Room concert if I had to choose one. Honestly, I think the production values in Full Bloom are much better. (While I love the DVD, I found the fade-outs between the songs to be a bit distracting). Also, I think we have the combination of better overall sound quality as well as a performance where I think the group was just a little more "on". So overall, to my ear at least, better sound, better performance. However, there's a more important reason. The Hugh's Room concert gives us 40-odd minutes of performance, while Full Bloom clocks in at 1:12. So, in addition to great sound, it's nearly twice as long – more music for us.

So, if you've been especially good, grab both the Hugh's Room DVD and the Full Bloom CD. If you have to choose, you won't go wrong with Full Bloom.

Back to main Full Bloom page